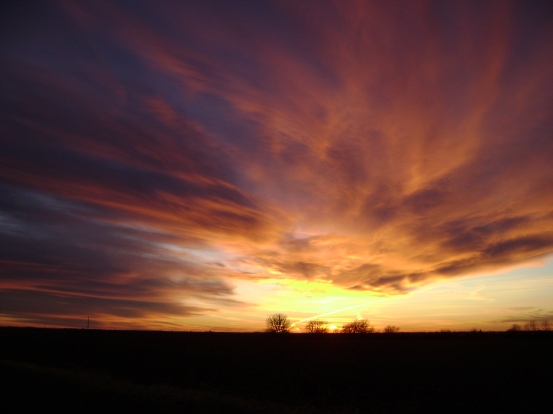 An unusually warm December day ends in a beautiful sunset near Silkville, Kansas.

Two Decembers ago, East Central Kansas was buried under snow drifts six feet deep. This year, we’re closing the calendar out with 50-degree weather and beautiful skies. In the wide open spaces between Williamsburg and the Franklin-Coffey county line, where only hints of ghost towns remain, the sunsets can take your breath away. Every second is a different color, a different texture, a different experience. Just a hundred yards or so from the sign identifying what is now the Silkville Ranch, the sky churned with more life than the land beneath it.

A century ago, this land was not so barren.

In 1869, Ernest Valeton de Boissière, a native of France, purchased 3,500 acres from the Kansas Educational Association of the Methodist Episcopal Church. He established Silkville, a self-sustaining commune whose primary export was silk ribbon. De Boissière built elaborate facilities, including a 60-room building to house Silkville’s residents, a winery, an ice house, a school house, and the structures needed to grow silkworms and produce silk. Silkville’s library was the largest library in Kansas at that time. For a short time, Silkville thrived.

As other companies began to compete in the domestic silk trade and the commune’s residents discovered they could earn better wages elsewhere, the commune began to fail. By the 1890s, the commune was gone, and de Boissière deeded the land to the International Order of Odd Fellows (I. O. O. F.) to establish an orphanage, but after de Boissière’s death, a legal battle over the property’s ownership ensued between the I. O. O. F. and de Boissière’s sister, Madame Corrine Martinelli. In 1903, Martinelli won the suit and seven years later, the land and its structures were sold for $130,000. Six years later, the 60-room house burned to the ground.

Today, most signs of Silkville–other than the Silkville sign itself–are gone. The structures have long since disappeared, and most of the mulberry and Osage orange trees planted to feed the silkworms have been cleared away to make room for grazing cattle. The area where most of the buildings were is now listed on the National Register of Historic Places as a Western settlement.

De Boissière’s idea of Utopia may have failed, but on a warm winter evening, when you can get out of your car and feel like you have the whole sky to yourself, it still seems pretty close to perfect.

Learn more about Silkville at the Franklin County Kanasas History Portal, or read Phyllis M. Jones’ recorded memories of the community that no longer exists.

9 thoughts on “Sunset in Silkville”