The past few months, Jim and I have spent every available weekend to get out of the house for a few hours, even crossing into Missouri–gasp!–to visit Civil War battlefields we discovered through the Freedom’s Frontier National Heritage Area website. So I have pictures and stories dating back to January that I’m just getting around to telling, and one of those stories is about the town of New Lancaster.

But first, some history. If you’ve read Jeff Guinn’s wonderful book Go Down Together: The Untold Story of Bonnie and Clyde, you know that Guinn suggests that part of the infamous duo’s success had to do with two recent inventions: the Rand McNally highway map and the motor inn.

Yes, before the early 1920s, Americans apparently bumbled around the countryside, following vaguely pointed fingers and obscure directions like “turn left at the Smith’s barn,” only to find out hours later that they were supposed to turn where the barn was before it burned down 20 years earlier, and which, as people from out-of-town, they had no reason to know about. And after an exhausting search for the long-gone barn, their only option for rest would be to pitch a tent in the field next to the dirt track that passed for a road when they were too tired to go on.

You can imagine how maps and motor inns might have improved the traveling experience.

Anyway. Jim and I were wandering around Miami County and I was studying Google Maps on my phone when Jim reached behind the seat and pulled out the giant paper Delorme Kansas Road Atlas, circa 1997. Despite cellphones and GPS, we haven’t let go of our paper maps, but I was still surprised when Jim actually found where we were on the back cover page index and flipped open the atlas and said, “New Lancaster? Have we been there?”

“I don’t think so,” I said, so off to New Lancaster we went, using an 18-year-old map, whose road names did not necessarily coincide with anything in reality.

But then we found New Lancaster, a town so tiny that you can stand in one place and see the “Pavement Ends” signs on both sides of the community just by turning your head. The the really amazing find was the New Lancaster General Store.

The New Lancaster General Store’s roots date back to 1874. After the original building was destroyed by fire, the New Lancaster Grange, a prominent community organization, bought the land and built a new structure in 1903. During the next century, the building would be bought and sold a few times, serving as a general store, a co-op, and a distributor for cream separators and John Deere implements. At different times it housed a telephone switchboard and the post office and operated a creamery, an ice stable, a poultry house, and a livery on the property.

Stephen and Kristin Graue, the owners and operators of Middle Creek Winery, took over the property, and last fall, they reopened it as a general store that specializes in Kansas goods and honors its historic roots. 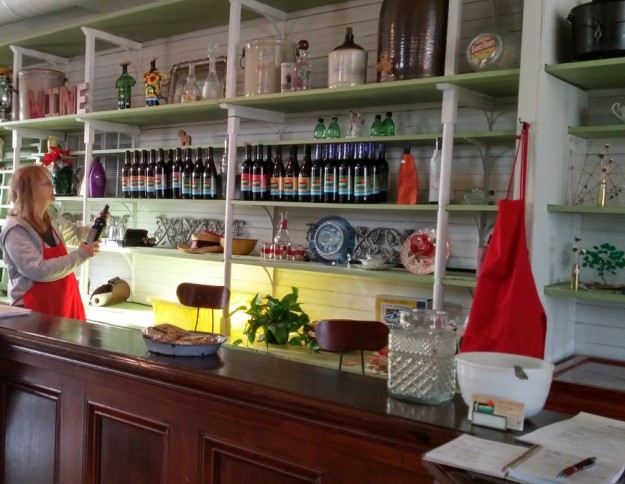 Kristin Graue pulls down a bottle of Middle Creek Wine.

So many of these types of false-front general stores have had their bones destroyed by constant repurposing. The New Lancaster General Store managed to survive the decades without too much carnage. The original floors, shelves, and tin ceiling are still in place, and I was especially charmed to see they still have a functioning rolling ladder that long-ago clerks would have used to reach the high shelves. 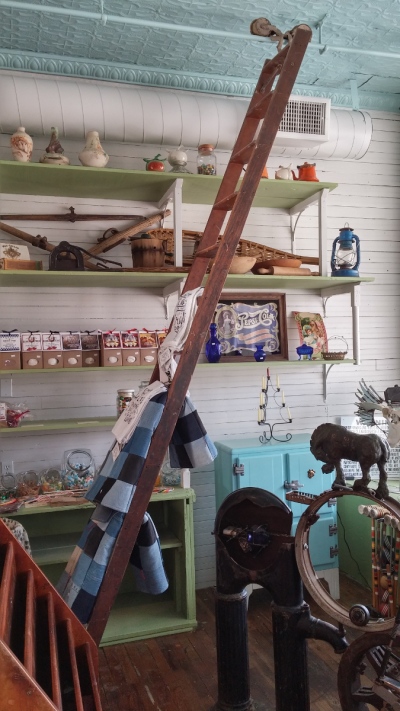 The rolling ladder at the New Lancaster General Store.

The Graues have also turned one of the back rooms into a country-chic meeting room that would be a lovely place for a getaway luncheon, bridal shower or baby shower. 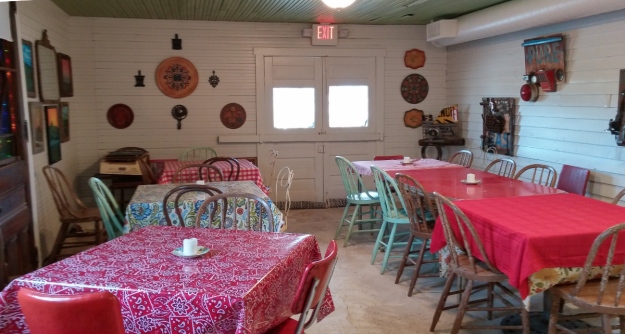 The meeting room at the New Lancaster General Store.

Should you find yourself in Miami County, this little country store is worth a stop. And feel free to ask questions! The Graues love to talk about the products they sell and the process of restoring the store.

And the Graues’ next project? Restoring the town’s old church-turned-Grange Hall, which will some day be another great place for weddings and other events.

The old Grange Hall is a block away from the New Lancaster General Store.