Stephan Anderson-Story shot the wonderful photographs of the house where the Knoblocks lived (and where Florence died) for the cover of Shadow on the Hill. Those photos were shot in 2010, and the house has deteriorated further since then. I was originally under the impression that no one had ever lived in that house again, it turns out various families moved in and out of that house through at least the 1950s. The house was eventually gutted and turned into a hay barn. Out of respect for the land’s current owners and for the general safety of the public, I’m not revealing the actual location of the house. However, you can see pictures of it (inside and out) on the facebook photo album page. 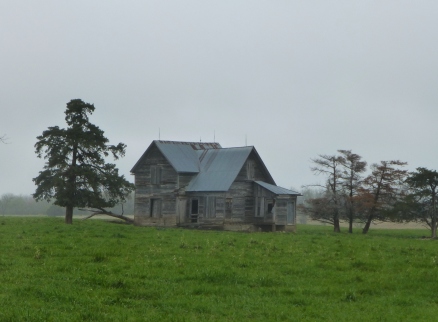 This recent photo shows how the house has deteriorated since 2010, when Stephan Anderson-Story shot the book’s cover photo.

What happened to John Knoblock and his son after the second trial?

After the second trial, John Knoblock attempted to make a life for himself and his son in Coffey County, were he primarily worked as a carpenter. He married Elizabeth “Betty” Altman in 1929; they divorced soon after. In 1935, John and Roger moved to LeMoore, California. John married Hazel Robinson in 1945. They remained married until his death in 1957.

Roger Knoblock stayed in California, married, and raised a family. He died in 2011.

Where is Florence Knoblock buried?

The monument for Florence, John, and Hazel Knoblock at Graceland Cemetery in Coffey County, Kansas.

I interviewed many people in the course of researching Shadow on the Hill. The few interviews chosen to be highlighted in the File Type section were picked because they offered a unique perspective that helped drive the narrative. Many, many other interviews helped build the story itself by filling in physical descriptions of people, their mannerisms, and what Coffey County looked like in earlier days. When possible, those people are credited in the Sources section at the back of the book.

Why didn’t you include photographs in Shadow on the Hill?

Photographs come with copyright issues, especially photographs shot after 1923. In addition, the setup for a book with photographs is more costly – both in terms of layout and rights to reprint a photograph in a book. (For example, I sought permission to reprint the township map from the 1919 on my website, but discovered it would cost several hundred dollars because someone else currently owned the copyright.)

Have you heard about the unsolved murder that happened just a few years ago? That would be a great subject for a book.

I, too, am fascinated by stories of crimes. However, I’m not up to researching any crime where a living, breathing murderer might still have a vested interest in not being discovered. Not only do I not want to interfere in an open investigation, but I also don’t want to endanger myself. I’d rather not end up the topic of someone else’s true crime book! That said, my top goal is trying to make historical crimes that impacted entire communities accessible to the modern reader.

Have you picked your next subject yet?

Short answer: Maybe! I’m currently researching an interesting series of murders that happened in 1909 and 1910, but whether or not there is enough information for a book is still to be determined. As you can see by Shadow on the Hill, it takes a lot of data to write an entire book.

Despite weeks of careful editing, after the book was released, it was pointed out to me that there were some errors in the lists of important people at the beginning of the book. The First Jury was most definitely in Coffey County, and my editor and I can’t figure out how this got past us. Similary, some of the members of The Court were misidentified. Here is the corrected list, with the corrected items in bold: