This weekend, I took advantage of the Museum Day Live events–when more than 1,400 museums across the U.S. offered free admission–to visit a museum that’s usually only open by appointment: the Old Castle Museum in Baldwin City, Kansas.

The Old Castle Meseum was originally known as The College Building. Founded in 1858, Baker University is the oldest continously running university in the state of Kansas.

The Old Castle Museum was originally known as The College Building because it was the only college building in Kansas. Founded in 1858, Baker University, a Methodist university, is the oldest continuously running university in Kansas.

As soon as the Kansas territory opened for settlement, the Methodists, who were staunch Free Staters, put down roots in Douglas County. Their land was very close to the Santa Fe Trail and Palmyra, which was an important watering stop that would later include a post office. The post office building, which was in operation from 1857 to 1862, was moved to Baker’s campus and is next to the Old Castle Museum.

Saving its land for the long-term buildings that would require more funding, the Old Castle Museum building was technically offsite when it was built in 1858. According to Jen McCollough, the museum director and archivist, classes were held in the Old Castle while funds were raised for a new building. One of the donors was President Abraham Lincoln, and it is said that the gift to Baker University was the only gift he ever gave to an academic institution. The building he helped  establish, Parmenter Hall, is still in use today.

Baker University is the only university to receive a gift from Abraham Lincoln. His contribution to the university would help build Parmenter Hall, the first official university building on university land. Lincoln’s donation is the second entry listed.

Parmenter Hall, the first official university building, is still in use today.

The Methodist university would attract other national leaders in its history, including U.S. President William Taft and Senator Charles Curtis, a Kansan who would go on to become the only Native American to serve as a U.S. Vice President.

After the Civil War, the Methodist Church took up another cause: Prohibition. On display at the museum is a document bearing the signatures of all but three Kansas Methodist ministers in support of Prohibition. An interesting fact: As Baker University sold off tracts of land, the deeds included a clause that said if alcohol was ever sold on that land, ownership would revert to the university. Much of what is now downtown Baldwin City is part of that original land grant, and it wasn’t until 2008 that the Baker University president officially revoked that portion of the deed, allowing local businesses to sell alcohol.

To show their support for Prohibition, the Methodists collected the signatures of all but three Methodist ministers in Kansas.

The College Building was never intended to be the university’s permanent home, and by the 1880s, it was sold and turned into a grist mill. The university repurchased the property for its fiftieth anniversary.  The building has undergone numerous changes during the years. The original third floor was constructed of sandstone, an unfortunate building material that disintegrated from the vibrations of the grist mill and hand to be pulled down. An extension was added to the west side of the building and was later removed. Then the university rebuilt the third floor.

Today, the Baker University Archives maintains the building as well as much of the local Methodist history for the state of Kansas. According to Jen McCollough, if churches or other local Methodist institutions close, their historic information goes to Baker University–an important thing to know if you’re researching your own Methodist ancestors. The building is an artifact in its own right. It reflects the history of both the university and Baldwin City, having served as an academic institution, a grist mill, a boys’ dormitory, a dining facility for post-WWII married student housing, and later a museum. Its exterior walls are covered with the names and initials of former students and grist mill workers.

Methodists indulge in graffiti, too. This sandstone patch on the south side of the building bears many names.

Should you find yourself in Baldwin City, the university and the museum are worth a look. They will further enrich your appreciation for how religious institutions contributed to the state’s heritage.

Known as both Pioneer Cemetery and Baldwin City Cemetery, this Douglas County burial ground’s first interment was in 1858 on land not far from a then-still-active Santa Fe Trail. The sign at the entrance highlights the native wildflowers on the grounds. It is poignant that many of the markers bear flowers, too. 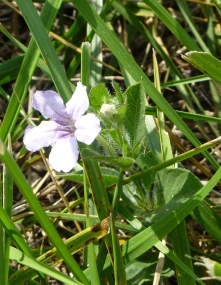