Last month, an old murder case I’m researching took me to Republic County, Kansas, a county in central Kansas that shares the boarder with Nebraska. I’ve never had a chance to explore this area before, so when I wasn’t buried in a back room somewhere researching, Jim and I wandered around, visiting museums and driving the back roads.

For a county with fewer than 5,000 people, Belleville has a lot of neat things to see–enough to merit several blog posts–but today I want to mention the fascinating and quirky Boyer Museum of Animated Carvings.

A lot of people are mechanically inclined, and a lot of people are artistically inclined. Paul Boyer is one of those people who looks at mechanical things and finds artistic ways to repurpose and apply them. He was just a child when he made his first carving, but after an accident left him seriously injured when he was 35, Boyer took refuge in his art. The result is dozens of wonderful animated carvings, whirling gizmos, and spinning things that mesmerize you with their cleverness and charm.  Some of his pieces were created over the course of thousands of hours. 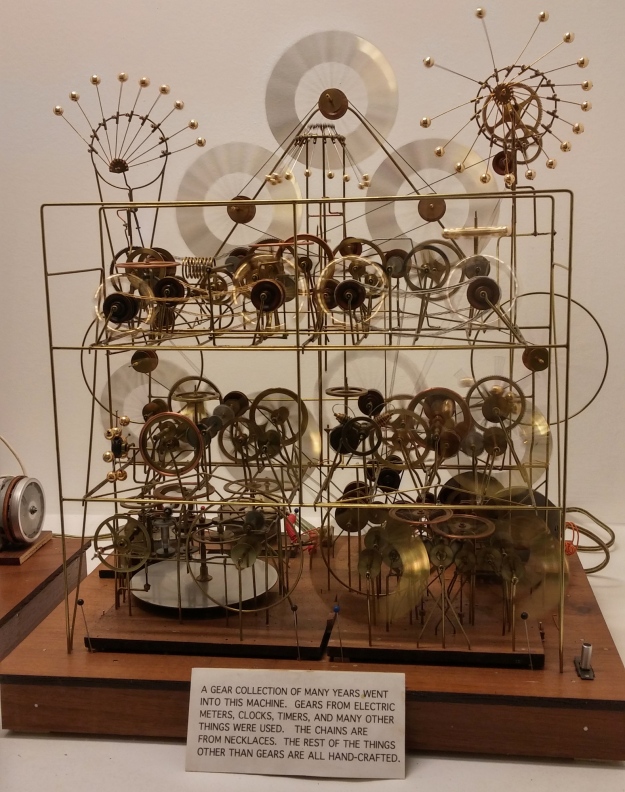 This beautiful sculpture, with it’s whirling gears and fans that fold and unfold like peacock feathers, is completely mesmerizing.

Each creation is housed in a case, and museum guests are invited to press the magic buttons that set the animations in motion. Jim and I easily spent two hours playing with these creations and puzzling over how they worked.

The museum is operated by Boyer’s daughters. Candy and Annie are passionate about their dad’s work, and they can often share the back story of how a piece was crafted and the challenges of keeping it running.

But words can’t do these pieces justice, so here is some video of two of my favorite animations.

At the Boyer Museum of Animated Carvings.

At the Boyer Museum of Animated Carvings.

The Boyer Museum is definitely worth a visit if you’re anywhere in the area. Because it’s a family-run place, you might want to call ahead to make sure it will be open that day, especially if the weather is looking ominous (Paul Boyer has instilled a healthy fear of tornadoes in his daughters). I will mention that a few of the pieces might be considered risque or culturally insensitive by some visitors, but all are pieces of amazing artistic and technical achievement.

If you’re interested in spending a day in Republic County, a trip to the Boyer Museum is easy to combine with a trip to the Pawnee Indian Museum, which I’ll be blogging about soon.