Wishing all of you and yours a wonderful holiday. Should you find yourself near Ottawa after dark this week, be sure to drive down Main Street, which is decorated with Christmas cheer! 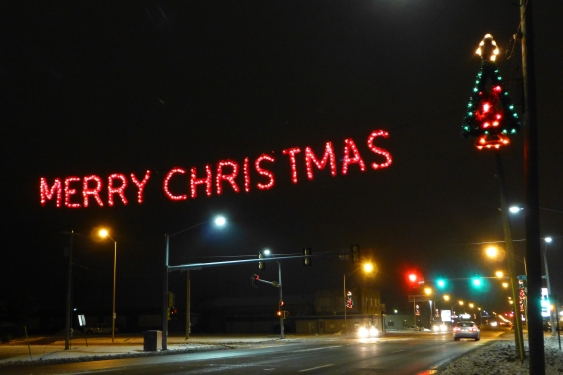 Historic downtown Ottawa is decked out for the holidays. Because I like to suffer for my art, I waited until the evening following our first snowfall of winter to bundle up and shoot photographs of the Victorian buildings on South Main Street, which are dressed up with lights on every facade and Christmas trees in every storefront window. My favorite touch is the star perched on top of the grain silo at the Ottawa Coop building. The snow was mostly gone, but the Christmas cheer could not be melted. 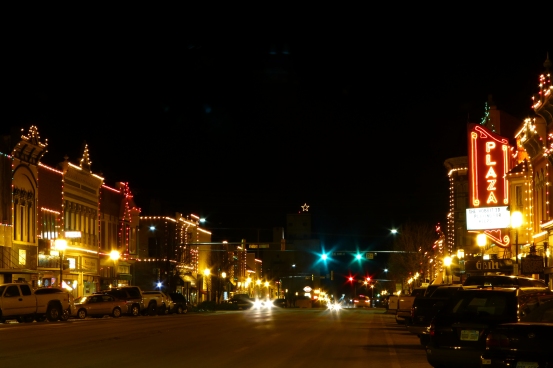 Happy holidays to all of my friends out there in the online universe!

At least three days each week, our travels take us through the little town of Williamsburg, Kansas, population 370. Now that winter has set in and the days are shorter, the tiny three-block main street–Old U.S. Highway 50–is a cheerful and bright respite sandwiched between miles and miles of darkness. 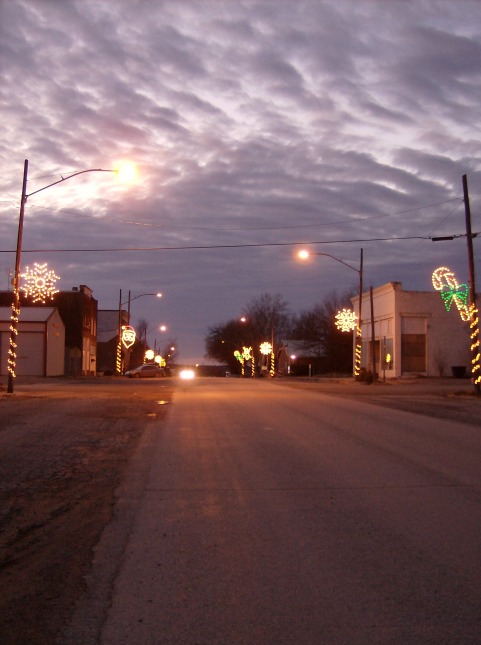 Just three blocks long, the commercial district of Williamsburg has more Christmas lights than people. I spent five minutes standing in the middle of the main road to take this shot.

I was going to write about the efforts little towns make to sparkle during the holidays. Emporia and Ottawa also string up the lights and baubles to infuse holiday cheer into an otherwise dreary, dark and cold season. But it wasn’t until I began to research the buildings in the shadows behind the lights in Williamsburg, trying to match them with historical photos, that I began to understand why Williamsburg is such an interesting town.

It shouldn’t have survived.

“Look at this old picture,” I said to my husband as I flipped back and forth between my shots of Williamsburg and an old picture I found of the business district, shot well before cars replaced buggies. The historic photograph of the Williamsburg business district, which I found at the Franklin County Kansas History Portal,  included a furniture/undertaker shop, a grocery store, and a post office.

The building I was especially interested in identifying was one that looked like it had only recently gone out of use. The windows were mostly blocked by the building’s contents, and we’ve never seen cars parked in front of it during our rides through town. Yet the words “Lucille’s Cafe” are neatly and fairly recently painted on the window glass.

A snowflake hovers in front of the storefront that was once Lucille's Cafe. Williamsburg, Kansas.

“None of these buildings look quite right,” Jim said, flipping back and forth between the two tabs, old and new. “Of course, that first picture is at least a century old.”

What began as a fun little Christmas post turned into a quest for photos and the history of downtown Williamsburg. According to William Cutler, whose History of the State of Kansas is still considered one of the first places you look for early Kansas history, the 30,000-acre township of Williamsburg had a strong start as a railroad and coal mine community. The Williamsburg Coal Company was able to mine over 25 tons of coal a day. By 1870, the town had a school, wood frame and stone homes, drug and grocery stores, a wagon shop, a church, and a mill. Within the next decade, there were banks and hotels, hardware stores and blacksmith shops, physicians, a newspaper and more about 400 inhabitants.

The town’s greatest folly, long before Interstate 35 moved in and turned U.S. Highway 50 into Old U.S. Highway 50, was its peculiar determination to burn itself down. Repeatedly.

According to “Williamsburg,” from The History of Franklin County, Kansas,

There were also cheese factories, a saw mill, a flour mill, and law offices.  The town was on its way to being a prosperous, growing community.

In 1890, a fire destroyed half the town. A few years later, lightning caused another fire that burned down the barn and carriage sheds behind one of the banks. Later fires would destroy the hotels, and yet more fires would ultimately burn down every single building on the business block except for the D. Fogle store, a stone building Fogle purchased shortly after it was built in 1869.  As one final insult, the school’s auditorium-gymnasium burned down in 1942.

Despite the relatively few remaining buildings downtown, despite the fact that other previously thriving nearby communities like Silkville and Ransomville are now nothing more than the names of ranches, despite the redirection of a main trans-Kansas thoroughfare, despite the fact that the railroad tracks were removed for good in the 1970s, Williamsburg is a tidy community with a stable and young population. The town has held on to its elementary school. Their local watering hole, Guy and Mae’s Tavern, produces the kind of BBQ ribs barbecue lovers dream about and connoisseurs are willing to travel long distances to eat. Williamsburg’s most recent achievement is the new community library, a charming community gathering place that offers books, technology, and meeting space.

Despite the fact that the town has a few gaping holes where buildings stood a century ago, despite the fact that its streets are quiet enough that I once had to pass a deer walking down the center of the business district, Santa will be coming to town, because Williamsburg is still a a living, breathing town.

And Santa, Guy and Mae’s will pack you a to-go order of ribs.

Santa hangs out just a few doors down from Guy and Mae's Tavern, home of some of the state's most famous BBQ ribs. Williamsburg, Kansas.