Although Franklin County was once a serious railroad town, today, freight trains rumble past the north end of town and go far, far away. 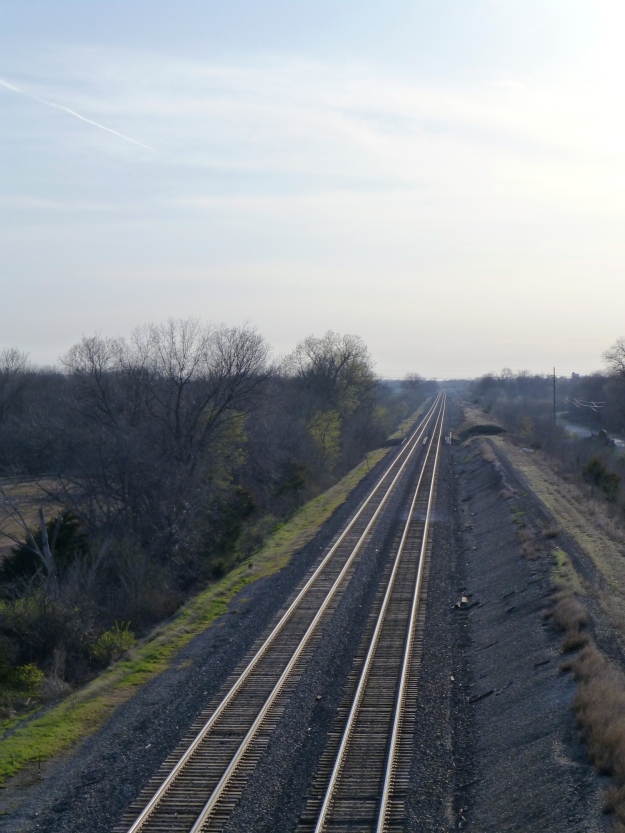 Train tracks stretch into the horizon from the Eisenhower Terrace bridge north of downtown Ottawa, Kansas. 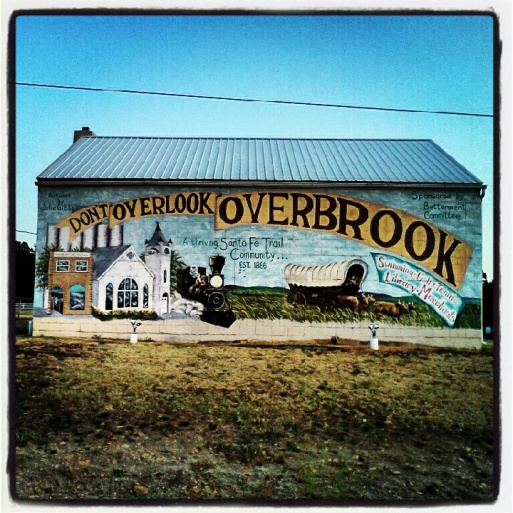 A mural decorates a building in present-day Overbrook. The mural depicts the town’s history: city hall (which is still in use), the M.E. Church, the railroad that  prompted the founding of the town site, and the thousands of wagons that crossed the area as they followed the  Santa Fe Trail.

The Santa Fe Trail crossed the town site for more than 60 years before the town was founded in 1886 by W. T. Coffman and J. B. Fairchild, who gave land to ensure the Nebraska-Kansas-Dakota Railroad would build through the town site.  While the railroad is gone–in fact, a former rail line is now the Landon Nature Trail–many of the historic sites of the Santa Fe Trail remain. Trail ruts can still be seen where they enter the town outside of the present-day Overbrook Cemetery. U.S. 56, which loosely follows the Santa Fe Trail, crosses through the town, which is just large enough to support a library and several businesses.

The first time I noticed it, I was curled up with a book on our old sofa in our new house. The lulling and soothing sound of a train in the distance had kept us company many, many nights during our years in Emporia.

My husband, Jim, noticed the sound, too.

Our little old house, built in 1925, is one of thousands of homes within a stone’s throw of the Santa Fe tracks in Kansas. But unlike Emporia, where the trains still rumble down the tracks, Ottawa’s trains were long gone.

Ottawa didn’t start out as a railroad town.

Franklin County — with Ottawa at its heart — grew around the various Native American settlements and a religious university.  In its earliest years, settlers passed through it along the Santa Fe Trail in the northern part of the county. The little town’s future was not secure until 1868, when the ambitious Leavenworth, Lawrence & Fort Gibson Railroad Company, whose plan it was to lay tracks from Lawrence, Kansas to the Gulf of Mexico, laid tracks to Ottawa.

With the railroad came prosperity. This little flood-prone town on the Marais Des Cynges River suddenly had the resources to build a public school and buy a steam fire engine. The Ludington House hotel had rooms to rent and the Ottawa Mills & Elevator opened for business on Main Street. By 1872, the LL&G had built a roundhouse and car and machine shops, bringing hundreds of jobs to the little town, whose population had climbed to 6,250 — nearly half of its present-day population. 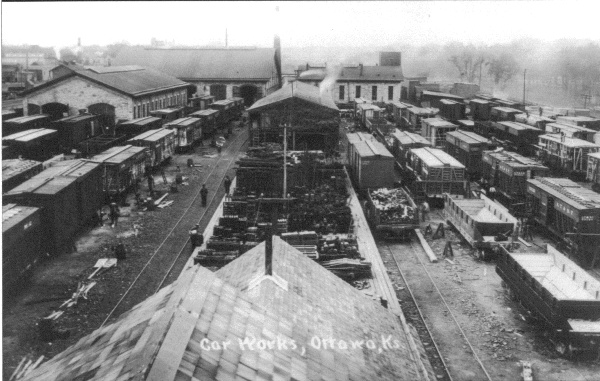 But the LL&G was in financial peril, and in 1878, it was sold to a new group, who renamed it the Leavenworth, Lawrence & Galveston Railroad Company. Yet the push to interconnect Kansas towns did not lose momentum. Operations in Ottawa continued to grow as the LL&G became the Kansas City, Lawrence and Southern.

In 1880, the Santa Fe Railroad gained control of the KCL&S stock.

Ottawa became one of the hubs of Kansas.

A new depot, designed by the great Kansan architect George Washburn, was built in 1881 and remained in use until 1962. The Depot became the the heart of all of the comings and goings, welcome hellos and tearful goodbyes, of generations of Kansans.

I think about where my house is located,  within walking distance of the Depot, and wonder what it would be like to be able to walk down the street and purchase a train ticket to almost anywhere in North America during a period in time when most people where traveling by horse or wagon. Even today, with so many modes of travel at my disposal, I am limited by how far I can drive first. To catch a train, I must drive to Topeka or Kansas City; to catch a flight, I must first make my way to Kansas City or Wichita for a commercial airplane. 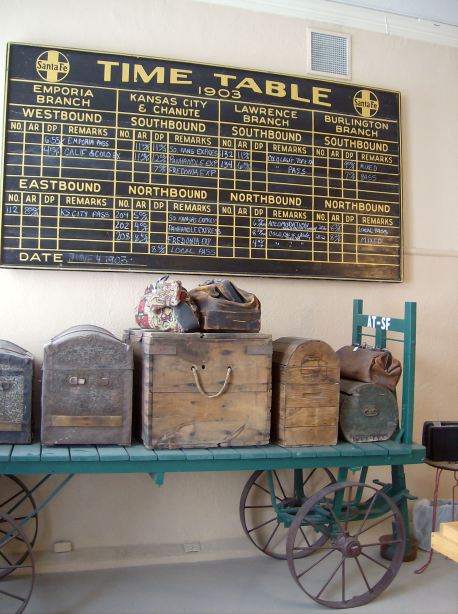 An example of a 1903 train schedule shows how easily Ottawans could move from city to city. On display at the Old Depot Museum in Ottawa, Kansas.

The last train rumbled past our little old house more than 30 years ago. For twenty years, the little towns were disconnected. Some old depots, like Ottawa’s were saved and repurposed into restaurants and museums. Other depots were not so fortunate.

Author Michael Perry once wrote, “Maybe that’s all you need to know about this town–the train doesn’t stop here anymore.” And many of those little towns, whose hotels and diners depended on railway traffic, shuttered their windows and locked their doors. The story of these little towns was approaching a sad ending as the Atchison, Topeka, & Santa Fe (ATSF) Railroad sold the line to the Kansas City Terminal Railway Company, who promptly filed for abandonment. 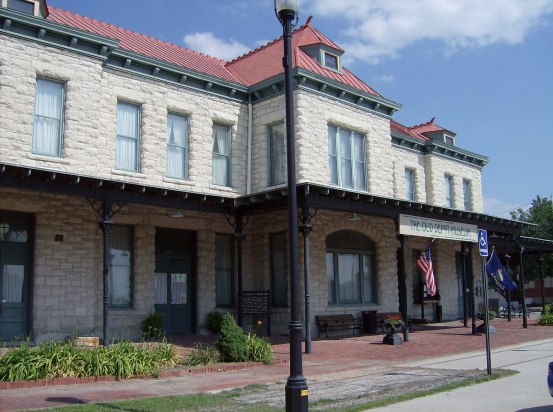 Built in 1881, the former Santa Fe Depot in Ottawa, Kansas, now serves as the Old Depot Museum. This grand building was lucky enough to find new life as a museum and trail head for the Prairie Spirit Trail.

But it’s not the end of the line. Thanks to the vision of the  Kansas Department of Wildlife and Parks and countless volunteers,  the old rail lines that once carried passengers from town to town are being reconnected through a rail-trail park called the Prairie Spirit Trail. Ottawa, Princeton, Richmond, Garnett, Welda, Colony, Carlyle and Iola can all be reached by foot or bike. The rail line, the connection, the web that strings together communities, is growing stronger as other rail-trail parks repurpose old railroad lines across the state.

The Prairie Spirit Trail as it runs past the beautiful courthouse in Garnett. There’s something magical in knowing that I could follow this all the way home.

I peek through the blinds of our living room window as the sound of the ghost train dies down and the air grows unnaturally still, far more quiet than the air ever was in Emporia.

It is drizzling and dark, but the well-lit Prairie Spirit Trail is still in use. A bicyclist rides north; a man and his dog walk south.

When the next ghost train passes by, I settle in to the comforting sound.

The Prairie Spirit Trail in Ottawa, Kansas. If you listen closely, you can hear the echoes of ghost trains passing through on still nights.

Special thanks to the Old Depot Museum for their excellent displays and information on the history of the Santa Fe Depot.