On March 16, I attended a presentation in LeRoy by the same Diana Staresinic-Deane mentioned above.

Her talk at the LeRoy Public Library was about the 1925 brutal killing of a young mother, Florence Knoblock, in Coffey County. After extensive research on the case, Diana wrote “Shadow on the Hill: the true story of a 1925 Kansas murder.” Her novelized version of this real-life crime, the investigation and trials, will be released this spring. (I’ll write more about her book after it’s been published.)

I decided to make it a Diana-themed day. Well, you know where this is headed. After all, I was kind of, sort of, in the Ottawa area, well – about an hour away. Because Keim’s had been pestering my mind for months now, I decided to wander my way to the bakery.

Follow the link to the rest of the story. And if you’re ever in Ottawa, stop by Keim Bakery. It’s a fabulous place to eat.

Saturday, March 16, was my first-ever public event as an author talking about my soon-to-be-published book, Shadow on the Hill: The True Story of a 1925 Kansas Murder. Fifty people–standing room only–showed up at the fabulous community library in LeRoy, Kansas to hear me talk about the history of the murder and read from my book. It was an author’s dream come true.

If you weren’t able to join me in LeRoy, more events are in the works and already scheduled for the not to distant future.

Me, reading from my book. Not one person fell asleep and started snoring during my entire presentation. Photo by Jim Deane.

I’m really pleased to announce that the first-ever event for Shadow on the Hill: The True Story of a 1925 Kansas Murder will be held in Coffey County! We’re going to talk about how Florence Knoblock’s murder impacted a community then and how it continues to impact Coffey County today. We’ll also talk about the book. Rumor has it there will be coffee and donuts. Click on the picture below for a pdf version of the flyer you can stick on your refrigerator. Thank you, LeRoy Branch, for inviting me! 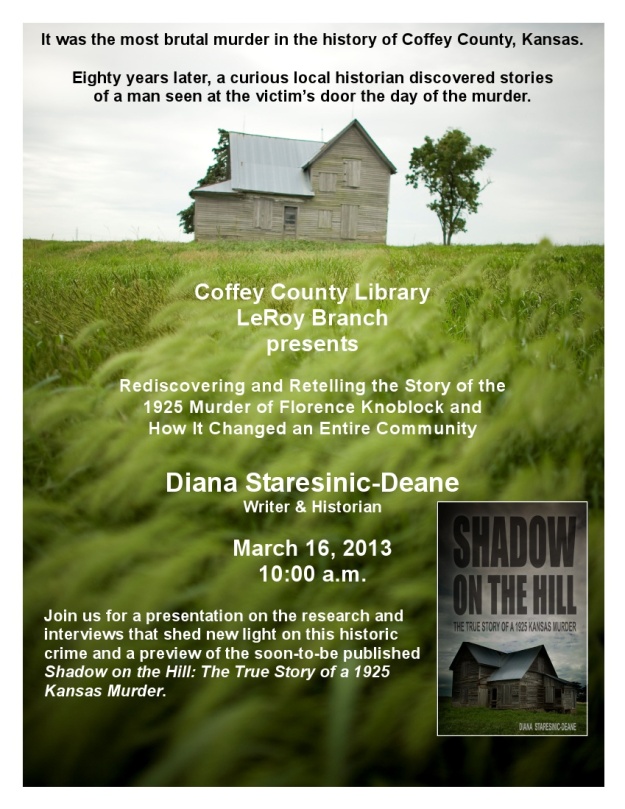