The history and current stories of the native and emigrant tribes of Kansas have been on my mind these past few days. My Sisters in Crime chapter (that would be a group of writers, not a group of criminals) was lucky enough to host tribal law expert Traci McClennan-Sorrell as our speaker this past weekend. And today, a story of a Wisconsin bill that would loosen the protection afforded to earth mounds constructed by indigenous people more than a thousand years ago–protection put in place after nearly 80 percent of these mounds were destroyed by farming and development–showed up in my Twitter feed.

The more I study Kansas history, the more I realize how little I know and understand the stories of the people who were here long before the rectangle that is Kansas came to be. Which is why during our Republic County research trip last May, Jim and I made a point of allowing time to visit the Pawnee Indian Museum, which is just north of Belleville and a short jog from the Nebraska border.

Here’s the first thing to know about the Pawnee Indian Museum: The land was not originally preserved because it tells the story of an amazing group of people who lived in Kansas hundreds of years ago. Landowners George and Elizabeth Johnson deeded it to the state of Kansas in 1899 (which accepted it in 1901, making it the first state historic site) because of the mistaken believe that explorer Zebulon Pike (of Pike’s Peak fame) stopped here in 1806 to raise the American flag west of the Mississippi River for the first time. And while he did stop in a Pawnee village to do so, it turns out that he was actually in the Pawnee village 40 MILES NORTH of the state historic site in the village the Pawnee moved TO after abandoning the one that was preserved.

However, this error in geography probably went a long way to protecting the Republic County site from being plowed into oblivion. The result is a truly wonderful site dedicated to sharing the story of the Pawnee in the late 1700s.

A map of the earliest tribes to live in the area now called Kansas.

In this area by the Republican River, a band of Kitkehahki Pawnee built an entire village of earth lodges, which were surrounded by a fortification wall. After the village was abandoned, the earth lodges, which were built over carefully packed depressions, settled in place, complete with any remaining contents. Part of the fortification wall still exists. A handful of the depressions have been excavated. In 1967, the museum was built over the largest unexcavated depression in the shape of a Pawnee earth lodge, and archaeologists carefully unearthed the contents, exposing them but leaving them in place. 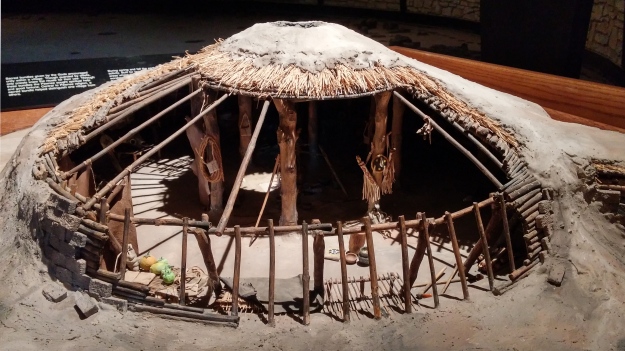 A model of what the Pawnee lodge would have looked like when it was still in use.

As a result, when you enter the Pawnee Indian Museum, you don’t feel like you’ve entered a museum. You feel like you’ve entered a Pawnee earth lodge. Wooden posts that once held up the roof fell in place. Grains, shells, pottery, and other tools lay exactly where they were found. The storage pit–which is several feet deep (the Pawnee buried their supplies underground, hiding them from anyone poking around their village during the seasons they were elsewhere)–is visible. And then there is the faint scent of wood smoke, which will make you feel like the inhabitants could return at any moment.

A view of the excavated area in the Pawnee Indian Museum.

The Pawnee did not live in the village all year long. During the hunting seasons, they followed herds of bison. The women also cultivated crops and stored them in the storage pits.

A sacred bundle–a bundle of items important religiously and symbolically to a Pawnee family–is reverently displayed over the sacred area of the earth lodge. It is the only artifact that cannot be photographed.

Around the perimeter of the excavated area are several displays about the history of the Pawnee. Audio recordings of memories, journals, and the Pawnee language make the visit to this site even more meaningful.

The museum does not end in the building. The site includes numerous depressions, and a walking trail and signage help you interpret the depressions and remaining fortification walls.

Signs along the walking trail help you interpret the depressions and remaining fortification walls.

After centuries on the Plains, the Pawnee’s population began to decline. As other tribes were pushed into the area that would become Kansas, the Pawnee were pushed out, and the tribal members who were not killed off by disease ultimately ended up in Oklahoma. By 1900, only about 600 Pawnee remained.

According to one of the displays at the Pawnee Indian Museum, Pawnee populations declined rapidly in the 1800s.

If you visit the Pawnee Indian Museum, give yourself several hours to explore the museum, listen to the audio clips, and wander the grounds. It’s also a great museum for asking questions. Museum site manager Richard Gould has been researching the history of the Pawnee for years, and his insight made our visit even more meaningful.

This site does an amazing job of making the story of the Pawnee accessible to visitors regardless of what knowledge they may have of the history of native tribes. I highly recommend making the time to visit this museum.